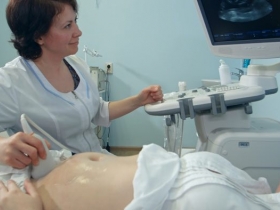 The seventeenth week of pregnancy is the beginning of the second trimester and the baby can be up to 17 centimetres and weigh 140 grams. By this point in time, parents-to-be should know the sex of their offspring, of course, if they wish to know so and don't want to be surprised at birth. The foetus has already developed two basic reflexes at this time, swallowing and sucking. For women who suffered from nausea and mood swings during the first trimester, these should be on the decline. What to prepare for during the 17th week of pregnancy?

Development of the baby in the seventeenth week of pregnancy

By week seventeen of the pregnancy, the embryo already has the distinctly recognisable features of a small human, and if it is well seen on ultrasound, it is possible to determine its sex. At this point, the baby begins to gain weight, as it forms fatty (adipose) tissue, which allows them to generate heat and maintain body temperature after birth. In addition, fat is also essential for metabolism and serves as a storehouse of energy that the baby will need after birth for development.

Along with the baby, the umbilical cord also grows and strengthens. The baby already has lashes and eyebrows at this point, even though its eyes are still closed. Auditory development is already at the stage where the baby can perceive and react to sounds in its surroundings. Some women claim that they began to feel the baby's movements in the seventeenth week, others do not begin to notice them until a few weeks later.

In addition to the swallowing and sucking reflexes, the child also develops other unconditional reflexes that every adult has and which are necessary for survival. Genital tissue development occurs. So far, they have been indifferent, but in the seventeenth week of pregnancy, due to the influence of testosterone, they begin to develop differently. In girls, the tissues that form the basis of the uterus and vagina appear. In boys, these tissues form the basis of the penis and prostate.

Examinations in the seventeenth week of pregnancy

At the beginning of the second trimester, the woman has already undergone the first - trimester screening, which is the first examination to detect possible complications, defects, problems or just warning signs. The first screening is carried out on the basis of a blood and urine analysis, blood pressure measurement and also the family history and current condition of the expectant mother. In the seventeenth week of pregnancy, another ultrasound examination is usually undertaken to look for possible developmental defects. A woman who has a complication free pregnancy should go for check-ups approximately every three weeks.

The expectant mother and physical changes

Women are already clearly visible in the seventeenth week of pregnancy, and for many it is a time when they must definitely give up their wardrobe pre pregnancy and start buying a new wardrobe. At present, unlike in the past, the market has a diverse and large range of maternity clothes. In addition, they can be very conveniently purchased in various bazaars or second-hand, almost unworn and for a fraction of the original price.

Unlike the first trimester, there is also a greater and faster weight gain. Normally, women gain about 1-2 kilograms during the first weeks of pregnancy. In the second trimester, it is common to gain around six kilograms. Many women also report an increase in their desire for sex during this period, which many experience much more intensely than prior to the pregnancy.

Many women suffer from haemorrhoids during this period of the pregnancy. These are basically varicose veins, which expand with the larger amount of blood flowing in the pelvic area. Another cause can be constipation, which pregnant women face, and the associated increased pressure during emptying. If you have varicose veins in your family, suffer from them yourself, or have had haemorrhoids in a previous pregnancy, the most effective is to reduce the consumption of foods that cause constipation, increase fluid intake and undertake regular exercise designed specifically for pregnant women.

Problems and risks in the seventeenth week of pregnancy

In addition to the already mentioned haemorrhoids, which are common for many women in the second trimester, many women show pigment spots on various parts of the body, including the face. Pigmentation is also the cause of darkening of freckles, birthmarks, areola, nipples and genitals. In some women, a dark line appears that leads from the navel to the lower abdomen (linea fusca or linea negra). Therefore, women should not be exposed to direct sunlight or sunscreens with a high UV factor during this period. In most women, darkening of the skin and pigment spots naturally disappear after childbirth or at the very least six weeks post the birth.

The beginning of the second trimester is good for a woman in many areas. Complications associated with the first trimester have subsided, such as nausea, mood swings, swelling, and other discomfort. The risk of miscarriage has also decreased. On the contrary, the woman is not yet at such an advanced level of pregnancy that she has to significantly limit herself. For example, it is possible to travel by air in the seventeenth week of pregnancy. But it is always worthwhile to consult a doctor about the trip, especially if you are going to exotic destinations.

It is also possible to exercise and engage in physical activities to a reasonable extent. It is ideal to choose exercises specially adapted for expectant mothers, such as pregnancy yoga, Pilates or swimming. You can also devote yourself to a cultural and social life and hobbies without any restrictions, with the proviso that pregnant women should not smoke, move around in smoky areas and consume alcohol and if need be, at the maximum if it is for a symbolic occasion.